Stephen Silver will be showing Organic: Geometric at the gallery March - April, 2023. 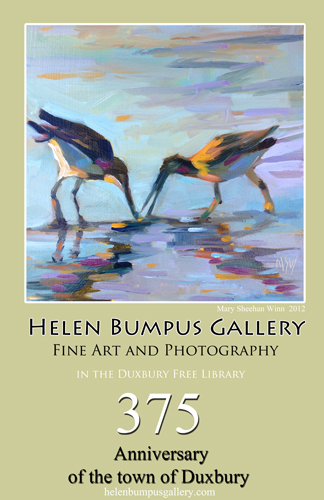 Mr. Speaker, I rise today to recognize the 375th anniversary of the town of Duxbury, Massachusetts, a beautiful coastal haven on the State's historic South Shore.

While the town itself was incorporated in 1637, people have inhabited the area for as much as 12,000 years. The Wampanoag tribe called the area now known as Duxbury ``Mattakesset,'' meaning ``place of many fish.'' Indeed, Duxbury is blessed with bountiful natural resources, including not only fish but shellfish, cranberries, rivers, ponds and idyllic beaches. Its English name was chosen by Myles Standish--an officer serving as a military advisor to the Pilgrims--who named it after Duxbury Woods in Great Britain.

Colonists in Duxbury fought in several early American wars, and during the Revolutionary War, the town maintained a militia of 60 minutemen under the leadership of Ichabod Alden. One of Duxbury's first natives, George Partridge, went on to represent the State of Massachusetts at the Continental Congress and was elected to the First Continental Congress.

The fishing industry developed rapidly after the Revolutionary War, when fishing rights were granted following the Treaty of Paris. What began as a small operation involving no more than a few families with two-masted schooners eventually grew into the largest ship-building port in the world. At the peak of the shipbuilding era, Duxbury boasted 20 shipyards and produced an average of 10 large sailing vessels every year. Eventually, swift clippers that required deep harbors superseded the brigs built in the shallower waters surrounding Duxbury, and the center of American shipbuilding shifted to Boston. However, several historical monuments to this era remain standing today.

The shift in the shipbuilding industry made way for a new industry to dominate Duxbury's economy--tourism. Thanks to its coastal location and natural beauty, Duxbury soon became a popular summer resort destination. Several area landmarks were built during this period, including the 130-foot Myles Standish Monument. The elegant Standish Hotel, originally built to accommodate the influx of summer visitors, survives today as two private residences.

Duxbury's population further boomed with the construction of Route 3, which made Boston and the surrounding region more accessible. The rapid growth that occurred in subsequent years helped shape Duxbury into the vibrant community it is today.

Mr. Speaker, the 375th anniversary of Duxbury is an opportunity both to reflect on its past accomplishments and look forward to its future. Its long history embodies the richness of American history and the indomitable spirit of the American people. May this remarkable Massachusetts town flourish for many years to come.

Stephen Silver will be showing Organic: Geometric at the gallery March - April, 2023.